This is a pop-up book that shows the nucleus of an active galaxy in three dimensions. It also includes a "Just-So" story entitled "How the Galaxy Got its Jets," the Tasty Active Galaxy Activity (described below), and a glossary.

It was created for younger students (ages 8 - 12), though it can certainly be enjoyed by the older crowd!

The pop-up Teacher's Guide can be downloaded here: 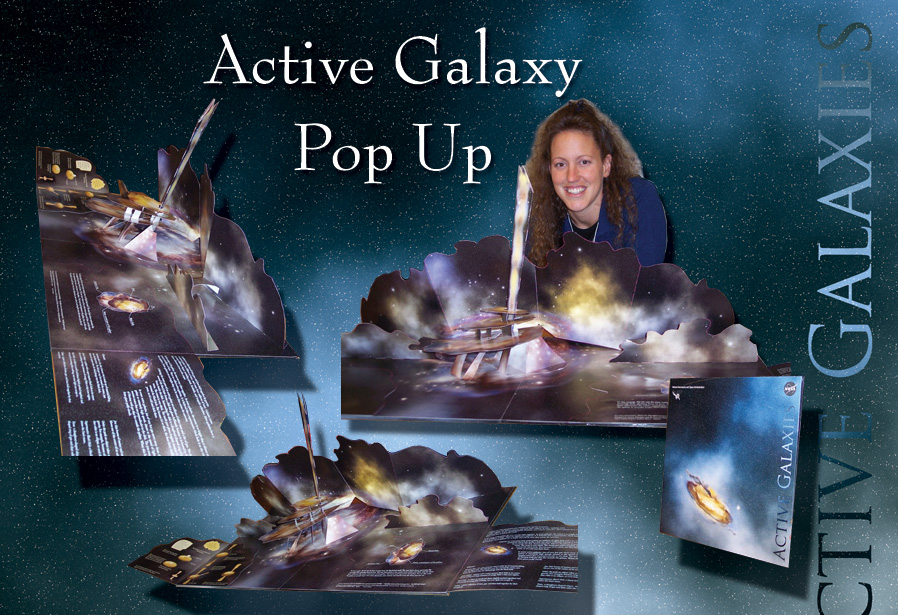 The pop-up consists of three parts:

Instructions for printing booklet - You will need three 8.5 by 11 sheets of paper. Set your printer to "landscape". Print all six pages of the PDF double-sided and stack all 3 sheets together so that the cover page "How The Galaxy Got Its Jets" and page "10" are on the outside facing "up". Fold the stack in half. Use staples for the binding along fold. Make sure you put the sheets in the correct order before you staple by checking the sequence of the page numbers.

A galaxy is a spinning collection of stars, gas, and dust held together by gravity. A typical galaxy has billions of stars, and some have trillions of stars. Galaxies come in many different shapes, but what they are made of and how they are held together is the same for all of them. Most galaxies have a dense core of stars at the center. In the core the stars are very close together. In some galaxies, the core is so bright that it shines with the power of trillions of suns. These are called active galaxies. It is believed that a supermassive black hole is at the center of these galaxies. Active galaxies are so bright they can be seen clear across the visible universe. Orbiting around the core of the galaxies are millions of other stars and a lot of matter in the form of gas. The matter swirling around the black hole forms a disk of material that glows brilliantly because it is heated by friction and other forces inside the disk. Surrounding the disk is a doughnut-shaped ring of gas and dust called the torus. The torus is very thick. The inside part glows brightly because it is heated by the matter around the black hole. But because it's so thick, it's cold and dark on the outside. In some active galaxies, jets of very hot gas move away from the core on either side of the galaxy at extremely high speeds, almost at the speed of light. These jets look like long, narrow tubes or cones that are perpendicular to the disk. The jets eventually slow to a stop because of friction with gas that lies outside the galaxy. When this happens, the jets billow out to form giant clouds of matter.

STANDARD: As a result of activities in grades K-12, all students should develop understanding and abilities aligned with the following concepts and processes:

Standards for the English Language Arts

Students read a wide range of print and non-print texts to build an understanding of texts, of themselves, and of the cultures of the United States and the world; to acquire new information; to respond to the needs and demands of society and the workplace; and for personal fulfillment. Among these texts are fiction and nonfiction, classic and contemporary works.

Students conduct research on issues and interests by generating ideas and questions, and by posing problems. They gather, evaluate, and synthesize data from a variety of sources (e.g., print and non-print texts, artifacts, people) to communicate their discoveries in ways that suit their purpose and audience.

Students use a variety of technological and information resources (e.g., libraries, databases, computer networks, video) to gather and synthesize information and to create and communicate knowledge.

Students participate as knowledgeable, reflective, creative, and critical members of a variety of literacy communities.

Students use spoken, written, and visual language to accomplish their own purposes (e.g., for learning, enjoyment, persuasion, and the exchange of information).